Whirlpool, a well-known brand in India has introduced its Home UPS or inverter systems at low prices.

Both models are suitable for normal Home use. We can use Ceiling fan, CFL lamps and Tube lights in these inverters. This inverter is not recommended for long backup for computers and any other sensitive application.

Probably, 800 VA would give enough power to run a kitchen mixer, which would consume 500watts. But we recommend Pure sine wave inverters for running mixers and small motors. In the long run, square wave inverters may damage your kitchen mixers, small water motors and water purifying systems. 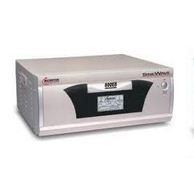